The crisis has had a serious financial impact on Serbian companies. More than half of the companies (54%) emphasize that the crisis has had a major impact on their finances and operations, while 40% assess its impact as medium. Small businesses have been severely affected by the crisis, especially those with up to 10 employees.

This is one of the findings of the survey conducted by the Serbian Association of Employers (SAE), with the technical support of the International Labour Organization (ILO) and in partnership with the European Bank for Reconstruction and Development.

The survey took place from April 7th to 30th, 2020, and 400 companies successfully completed the tool. The survey was conducted among employers in order to assess the impact of the COVID-19 pandemic on the activity of enterprises in Serbia.

The survey showed that the COVID-19 pandemic had a moderately negative effect on operations. The lowest resistance was shown by companies with up to 10 employees, i.e. companies in the hotel and catering industry, transport, real estate and the textile industry.

According to the survey, just under a third of Serbian companies will recover from the crisis within a month, while employers rarely consider temporary or permanent closure. In addition, a third of companies (and slightly more) will need one to three months to recover, while a third will recover in three to six months.

The catering sector was most severely affected, because most companies in this sector were prohibited to work for almost a month and a half (from March 22nd to May 1st), which led to a complete lack of demand and thus serious problems with the inflow. As a result, 17% of these employers are considering closing the company, probably due to accumulated debts and / or the general feeling that the recovery of the tourism sector is uncertain and will be rather slow. 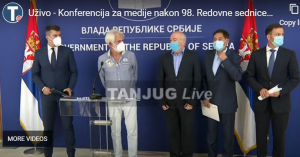 The year of solidarity and cooperation